Ridge and furrow on my doorstep.

Ridge and furrow, what is it?

I have detected on many ridge and furrow fields, with very little success.
It always gets the blood flowing when you turn up to a dig and see those ancient markings in a field. It sends out a message that this land has been used throughout history and therefore finds will be abundant. Well I am sure that this will be the case for some people, but I have never had such luck, in fact I avoid the R&F fields when I go on a dig.
Now the town I live in grew up around the coal mining industry, I know little about what occurred here prior to mining fever taking hold. I know the A5 runs through one side of the town, with a famous Roman landmark being only 4 or 5 miles up the road.
But that’s it to my Knowledge; I know little else about its history. I follow a great blog by Brownhills Bob Here which I am sure contains some information about pre mining Brownhills. Once I have posted this blog I will have a trawl through the many great maps and post Bob has on the subject.
I have detected on a patch of wasteland on and off over the last 20 odd years and found a fair few bits and bobs. Part of the land had ridge and furrow characteristics which I had noted, but never thought about investigating further.
Today I had a trawl over Google earth and spotted how prominent the markings looked. Here is an image of the R&F from my screenshot. 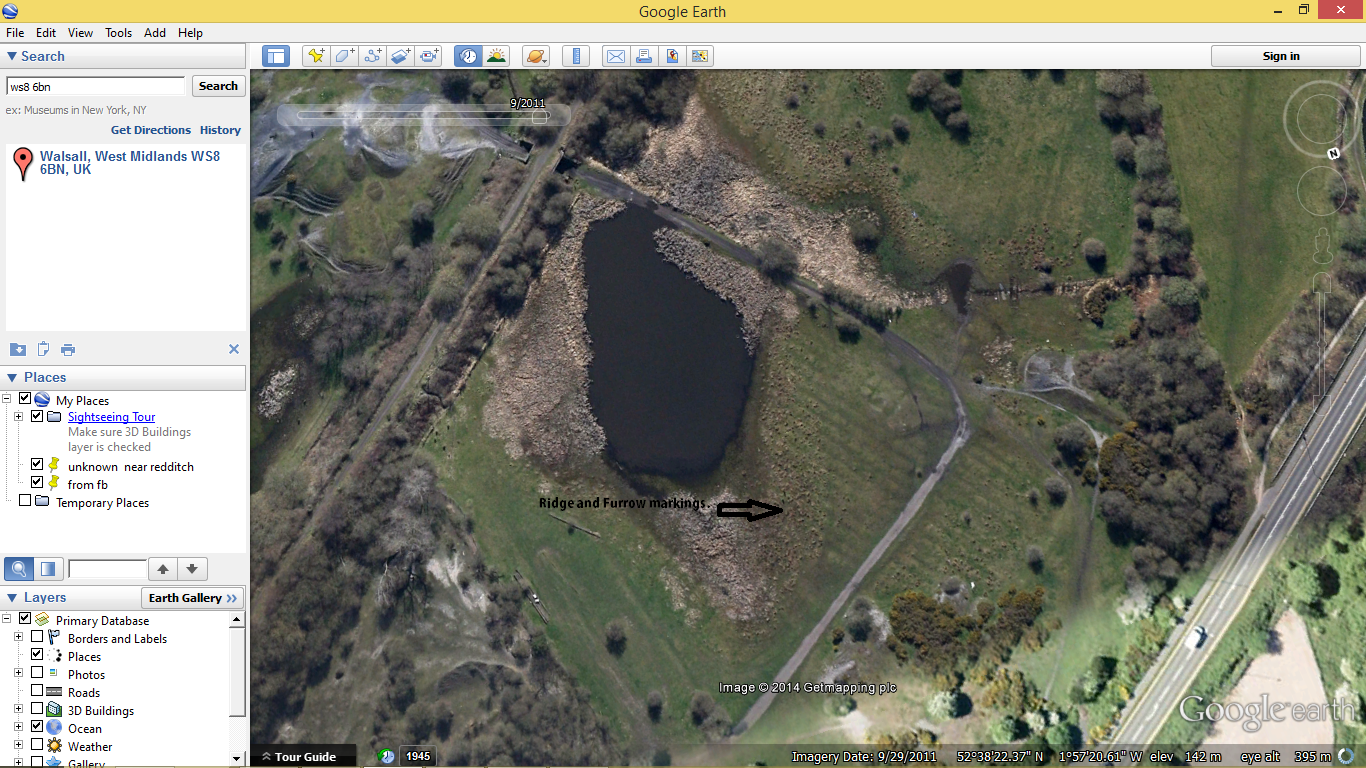 Below is an extract from Wikipedia relating to R&F.

Ridge and furrow is an archaeological pattern of ridges (Medieval Latin sliones) and troughs created by a system of ploughing used in during the Middle Ages, typical of the open field system. Other names for this are reans (or reeans) and butts - the rean being the furrow between two butts. Field names using rean exist on Tithe maps. It is also known as Rig and furrow agriculture, mostly in the North East of England.[1]
The earliest examples date to the immediate post-Roman period and the system was used until the 17th century in some areas, as long as the open field system survived. Surviving ridge and furrow topography is found in , and elsewhere in . The surviving ridges are parallel, ranging from 3 to 22 yards (3 to 20 m) apart and up to 24 inches (61 cm) tall – they were much taller when in use. Older examples are often curved.
Ridge and furrow topography was a result of ploughing with non-reversible ploughs on the same strip of land each year. It is visible on land that was ploughed in the Middle Ages, but which has not been ploughed since then. No actively ploughed ridge and furrow survives.
The ridges or lands became units in landholding, in assessing the work of the ploughman and in reaping in autumn.[2] Strips were sometimes known as quillets such as those on the Tithe Map of Erbistock in Denbighshire.

Here is an extract from British Archaeology web site the poo poo’s my theories to some extent.
Text taken from Here.

Not all surviving ridges relate to pre-enclosure fields. There are two other types that commonly occur, both dating from the 19th century. Wide ridges were sometimes ploughed within enclosed fields, again for reasons of drainage; they are distinguished from open-field ridges in being generally straight, rather wider (often 20m), not so steep and always parallel to at least one field hedge. An outside furrow going all round the field completed the ploughing technique. Good examples survive at Naseby in Northamptonshire (they can be seen from the A14), and other examples are known in .
Another type of 19th century ploughing, most common around and in , has very narrow ridges, 2m - 3m wide. The narrowness distinguishes them from pre-enclosure types; they too fit within present-day hedged fields.
Historical records, particularly open-field maps and detailed ridge-by-ridge surveys amplified by lists of open-field orders or regulations, reveal much interesting information about ridge and furrow. The scattered distribution of strips across a township was often managed in a regular pattern, so that if there were 40 yardlands in each township, a ridge belonging to one farm would be placed at every 40th position, and the farmer would always have the same people farming the ridges either side.
Ridge and furrow is generally regarded as `medieval' but the age of surviving remnants is strictly the date when they were last ploughed, that is when a township was enclosed. For many places this was in the period 1730 - 1840, with examples known as late as 1895 and 1901. Away from the enclosure was usually much earlier.

The ridge and Furrow i have been looking at does not appear to have any hedge boundaries, which may point to it being early. This is something i will have to investigate further though.
It would be nice to be able to pin some history to those markings.
I will post a follow up to this very soon.

Email ThisBlogThis!Share to TwitterShare to FacebookShare to Pinterest
Labels: Brownhill, ridge and furrow